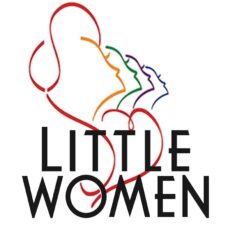 A Mother And Four Daughters Are At Home In Concorde, MA — Far From The Warfront

Reverend March is away from home, serving as a chaplain for the Union during the Civil War. His wife, Marmee, has remained in Concorde to, MA, look after the couple’s four daughters – each on the brink of adulthood.

Jalyn Webb is excellent as the concerned Marmee, trying to keep her daughters in line while facing challenges of her own. The girls have their share of sibling rivalry as well as familial love!

The eldest is Jo, a bit of a tomboy who is always eager to show her rough and tumble side while not quite knowing how to accept neighborhood boy, Laurie, into the group. She is a writer who has already received numerous rejections from several publishers. “Little Women” is basically Jo’s tale, with memories of her childhood and family and fanciful stories interspersed throughout the show. Jo is portrayed by Emery Hines, a newcomer to the Candlelight stage. She is excellent.

Sara Kowalski portrays Amy, a romantic, with issues of her own – very unhappy to be in Jo’s shadow, claiming that she has nothing on her own. Meg is portrayed by Elaina Osburn, a more traditional woman eager to take on the role of a caring mother. Beth, played by Charlotte Movizzo, is the more timid of the family, willing to stay somewhere in the shadows of her more outgoing sisters. One of the show’s highlights, however, occurs when Beth sits at the piano with a cranky neighbor, Mr. Laurence, making delightful music together with “Off to Massachusetts.”

Almost a part of the family is the neighborhood boy, Laurie, very well portrayed by Eric Heine. Laurie lives with his grumpy grandfather, Mr. Laurence, who the March family feels is aloof and unpleasant until Beth’s music softens him. Todd Resseguie is convincing as the dour grandfather, touched by Beth’s music.

Michelle Jeffres is a wonderfully-annoying as a somewhat stereotyped Aunt March, eager to irritate everyone. She announces she will take Jo to Europe to give her culture and refinement. When Jo doesn’t meet her idea of perfection, however, she takes Amy instead. Chris Bain is Professor Bhaer who Jo meets in a boarding house when she is living in New York, and is interested in her potential as a writer. Ethan Lee Knowles is Mr. Brooke who meets Meg March at her first ball and immediately woos her.

The set is minimal, and is particularly effective. The lighting is also very good as are the costumes and choreography. Scenic design and lighting are by Shauna Johnson, costumes by Liz Hoover and Judith Ernst; scenic arts by Joel Adam Chavez; wardrobe by Judith Ernst; and sound by Kyle Harper.

Pat and Payne and Phil Forman have co-directed the production, with chorography by Susanne Houdesheldt, and music direction by Phil Forman. Orchestra consists of Mr. Forman, Heather Holt Hall, and Joshua Margheim.

“Little Women” was written by Louisa May Alcott of Concorde, and appeared in print as a semi-autobiographical two-volume novel in 1868-69. It went on to become a literary classic, appreciated throughout the world.

The stage musical version opened on Broadway in 2005, starring Sutton Foster as Jo. Foster received excellent reviews, and the production ran for 137 performances. The Candlelight production looks very good and the cast is universally eager to please. Music is by Jason Howland with lyrics by Mindi Dickstein. The audience does not leave the theatre humming the music, which sometimes gets in the way of the story. The story itself is well told and will provide those familiar with the story a great opportunity of seeing how the characters they well remember are currently portrayed.

Two songs are particularly good. Emery Hines as Jo sings a wonderful “Astonishing” at the end of an overly-long first acts and arrives too late to be fully appreciated. Jalyn Webb’s Marmee pulls out all the stops in “Days of Plenty,” mid-way in Act II.

The total production comes through with a tender tale of family love. This is a warmly effective look at the March family’s life in Concorde during the Civil War. It is set to be on stage at Candlelight to June 6.