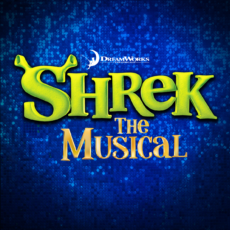 Johnstown, Colorado, is a magical place this summer. On the Main Stage of The Candlelight Dinner Playhouse, a terrific production of “Shrek” opened to enthusiastic response in June. Separate from the Candlelight Dinner Playhouse is The Academy By Divabee, a production organization headed by Candlelight performing favorite, Jalyn Webb. While the current “Shrek” production continues on the Candlelight stage until August 22. The youthful performers of The Academy participated in the school’s summer program and put together their own “Shrek” version for two performances in July.

I thoroughly enjoyed opening night of the primary “Shrek,” production in June. So much so, that I asked if I could return to see the young persons of The Academy at a rehearsal of the same show a few days later. The rehearsal was an eye-opener. The cast was substantially larger than the main-stage production, and there as a feeling of camaraderie that is remarkable. The young people had bonded to the extent that they were cheering each other on, with every rehearsal number becoming a show-stopper.

The result was my return again to Candlelight July 19 for the second (of two) performance of The Academy youth group. What a show! “Shrek” is basically tale of fairytale characters who have experienced difficulty in accepting themselves in a harsh world – now being evicted from their Duloc homeland to live in a swamp, home of an angry and sorrowful ogre. The fairytale creatures consider themselves as “freaks,” having difficulty in coming to terms with their individual value. Being a fairytale character isn’t as wondrous as we might imagine.

The youthful performers were definitely not fairytale “freaks,” but talented teenagers perhaps realizing for the first time what amazing performance gifts they possess. The Academy has provided a terrific environment to realize the extent of their talents. They bonded under the guise of the wondrous “Shrek,” to provide a magical evening of entertainment for each other, for family, and for friends. In future shows they will become stars on the main stage, just as they are currently “stars” in student Academy.

The original Broadway “Shrek” production had a cast of about two dozen performers, whereas the original Candlelight show has just 13 – requiring each performer to play more than one roll. The situation was reversed for The Academy show, with about four dozen performers taking on the two dozen rolls. This has resulted in a particularly interesting evening, as some of the fairytale characters are played by more than one performer. Gillian McCreery, Hannah Schorr, and Aly Toews were equally convincing and professional as Fiona, the princess locked in a tower waiting for a prince charming to rescue her. Alden Vieira and Ali Steen took turns as the loveable Ogre, Shrek, who wants the fairytale creatures to get out of his swamp and return to their homes in The Kingdom of Duloc. Nathan Moss and Jack Ham took turns as Donkey, the fast-talking animal whose main desire is to be somebody’s “friend.’ The six performers were delightful as they wove their own personalities into the three primary characters. Laura Caikowski was a show on her own, taking on the role Duloc’s Lord Farquaad, the diminutive character sired by “Grumpy” of Seven Dwarf’s fame who was never accepted by his father. Caikowski was a wow, as she performed on her knees as the dwarf her “Grumpy” father sired. Another stand-out was Leta Peret singing the role of the somewhat ferocious but lovable dragon.

The choreography was excellent, as were sound, lighting and costumes. Scenery used by the regular show continued to be super. The Academy performers were amazing. They all danced. They all sang. They became a single unit of great talent. And they put the show together from introduction to final curtain in just three weeks! This was rehearsing for four days a week for three weeks – for a total of only 12 days! The audience in the shows’ final performance did not want to show to end. The standing ovation of was prolonged. Webb announced that instead of greeting cast in the lobby of the theatre after the show, the cast was so large, that they would be greeting family and friends outside in front of the building This turned into a love-fest of performers, families and friends in a near hero-worship jubilation. It was an exciting night. One that all of the cast and crew can remember with great fondness. In the future, if they ever have the slightest inkling that they are not super individuals, they can look back on this experience with great affection.

And with such great memories still fresh, I’m returning to the original Candlelight production again this week, knowing that the joy of the story remains intact. Waiting in the wings for future stardom are four dozen members of this year’s Academy.