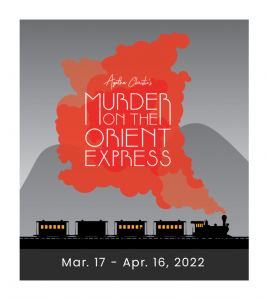 Passengers congregate in Istanbul, to board the famous “Orient Express” train to travel to Western Europe in the 1930s. They are a disparate group, a mixture of unusual characters, with one of them (Mr. Ratchett) to turn up dead not long after departure from Istanbul. Who could have killed Ratchett? And was his name really ”Ratchett?” Fortunately, one of the train’s passengers is the famous detective Hercule Poirot. Can he solve the mystery?

For several years Raja Salaymeh was a talent to be reckoned with, primarily as owner of the Union Colony Dinner theatre in Greeley. He has been absent from local stages for much too long. His return to the stage as the detective Poirot is a reminder of how much he has been missed. He is excellent as the careful detective. Welcome back, Raja! And I am not giving away any secrets — he does solve the mystery before the train arrives in Western Europe!

Candlelight is highly respected for its super musical productions and has taken a risk with producing a music-less show. It succeeds in every way. While Salaymeh is the show’s “star,’ he shares the stage with a super cast of talents. These “talents” are not only the performers, but the staging itself. The cars of Orient Express train fit nicely onto the stage with a great rendition of the train designed by Casey Kearns, with Master Carpentry by Dave MacEachen, and Scenic Painting by Joel Adam Chavez and Lelah Radostis. Lighting, costumes, and sound are excellent. For most Candlelight productions mention is made of “Choreographer.” As “Murder” is not a musical, it has no dancing, but credit is given to Miranda Guettlein as “Dialect Coach.” She has done a great job with the cast’s diction. The sound system is at its best, and there was no problem in understanding virtually everything that was spoken in the entire show.

Playwright Ken Ludwig has done a very good job transferring Agatha Christie’s 1934 worldwide favorite “Murder” story to the stage. Director Kenny Moten has taken the Ludwig work and wondrously transferred it to the Candlelight stage. Moten is one of those theatrical magicians who appear to be able to do just about everything from performing to directing.

The train’s passengers include a super cast of Candlelight favorites and new faces playing roles secrets that make them possible murderers. But not to worry, Poirot will find who dunnit! In the meantime, the audience can watch the goings-on while the train is partially stalled in the mountains due to a freak snowstorm.

Elliot Clough portrays Bouc, a longtime friend of Poirot who is Director of the Wagon Lits train Company. Chris Bain has two roles – Colonel Arbuthnot as well as the murdered Samuel Ratchett. Alexander Watson plays McQueen, secretary and translator for Ratchett. Hugh Butterfield, who has turned out to be one of Candlelight audiences’ favorites, turns up this time as Michel the train Steward, trying to take care of everyone on board when the train becomes snowbound. Samantha Jo Staggs is regal as Russian Princess Natalia, with Charlotte Lafonte as her travelling secretary, Mary. New to Candlelight audiences is Emily Valley, who portrays Greta, a Swedish missionary. Another new is Sarah Gibson as American widow, Helen. Her role is one of the show’s most interesting, and she is excellent!

Everything works to perfection in this clever tale. It is a one-of-a-kind theatrical delight. It does appear, however, that the show might be completely sold out for its entire run, so speed is required to check for tickets. Yes, this Agatha Christie mystery is, simply said “Enormously fun entertainment.”