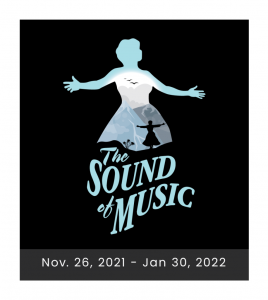 “How do you solve a problem like Maria?”  That’s what the nuns in an Austrian Abbey are asking, concerning the actions of a new postulant who claims she wants to become a nun, but doesn’t yet fit into the mold they have hoped for.  The postulate, Maria, is late for dinner (yet again) as she has immersed herself in the scenery of her beautiful nearby mountains.  The beauties of the mountains have been her lifelong happiness. She soon has the entire audience of “Sound of Music” equally in love with them, just as they become in love with Maria.

Emery Hines is brilliant as the singing nun.  When the curtains open, a wondrous scene of the Alps unfolds, and the magic begins as Maria sings, “The hills are alive with the sound of music.”  Suddenly, the stage, the audience, the cast, and all of Johnstown become “alive” with the sounds and sights of this wonderful show.

The pandemic has changed many of us, sometimes to the point of not particularly caring about returning to a theatre for a live show.  What a tragic mistake.  From the moment the curtain opened to show the mountains and Hines began to sing, I was “hooked.”  This is truly one of the finest productions to be seen in recent memory!

The Abbess tells Maria that while everyone truly loves her, she does not seem to fit into the convent’s routine.  She has arranged for the young woman to become a governess for a family in a nearby village, to oversee the lives of seven children who have recently lost their mother, and whose father is choosing to be away frequently.

Maria accepts the challenge.  She arrives at the luxurious Von Trapp family home to find seven delightfully mischievous young children marching to the orders of their strict military father and desperately in need of love and affection.

Based on a true story, the Von Trapps are facing many problems, the least of which is that their beloved Austria is soon to be annexed by the Nazi regime in Germany.  Captain Von Trapp is a highly respected retired military officer the Nazi regime needs to help in their war effort.  This is very somber stuff to end up as a joyous musical classic.

Maria’s arrival at the family home is met with interest from the children, resentment from their father whose means of fathering consists primarily of blowing a horn whenever he wants the family to assemble, and to make certain they march for health each day.  Maria, on the other hand, loves to gather the children around the comfort of her bed, sing to them, tell them stories of her “favorite things,” resulting in their adulation of the new governess.

Music by Richard Rodgers and Lyrics by Oscar Hammerstein II were the final effort of the world-famous Rodgers and Hammerstein team.  It opened on Broadway in 1959, and was an instant hit.  Hammerstein died just nine months after the opening.  It was filmed as a movie in 1965, again receiving great reviews including “Best Picture” starring Julie Andrews.

While Emery Hines as Maria is the show’s star, the entire cast is remarkable.  Scott Hurst has an excellent voice as Captain Von Trapp.  Near the show’s conclusion he solos “Edelweiss”as the family is in an Austrian music competition.  He then asked the audience to sing along with him, and the result is a heart-warming realization that this man is singing about his beloved Austrian homeland, as he is about to try to hike his family to safety in Switzerland to get away from the Nazis.  The Candlelight audience participation is heart-felt!

Steve Wilson has directed this show, with Carrie Colton as choreographer and Phil Forman as music director.  The entire artistic team at Candlelight has combined efforts to provide a production that will be hard to equal.  The scenic design is a marvel of beauty.  Sound, light, and choreography are wondrous.  The orchestra and entire cast are flawless.

The cast is comprised of seasoned Candlelight talents, combined with delightful young newcomers, some making their first stage appearances, serving as the Von Trapp children. Families who see the show must be warned that any young people they bring with them will immediately set their sights on performing arts careers.

Jalyn Courtenay Webb is spellbinding as the Mother Abbess who stops the show with her instructions to Maria, “Climb Every Mountain.”  Hugh Butterfield is convincing as Max Detweiller, Von Trapp’s friend who is trying to help them flee from Austria.  Heather McClain is very good as the highly successful Austrian business woman who would like to become the next Mrs. Von Trapp.  Susanna Ballenski and Ethan Walker shine as the teenagers being introduced to romance.  Ballenski is the 16year-old Von Trapp daughter. Walker is the “older by one year” messenger boy who wants to take Liesl under his protective wing.

Rodgers and Hammerstein provided the world with an amazing array of wonderful productions including “Oklahoma!”  “South Pacific,”  “The King and I,”  “Carousel” “Flower Drum Song,”  and concluding with the beautiful “Sound of Music” as on stage this autumn at the Candlelight.  The Candlelight has a wonderful track record of providing great family entertainment.  There is something unique to this particular show, however.   It provides the audience with a rare emotional experience seldom found on stage.  This is a production not to be missed!