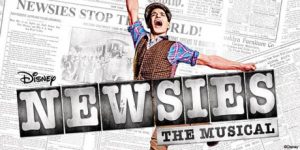 Dancing is terrific! Director Pat Payne and Choreographer Matthew D.  Peters have rounded up an amazing group of dancers to soar and leap nearly non-stop for two and one-half hours. Opening night audience broke into applause a couple of times during the routines – not even waiting until the end of the dance.

Alan Menken wrote the “Newsies” music, but it is not every-day familiar. Most of the audience appeared to know it better than I did. Many noted they were fans of the 1992 movie musical starring Christian Bale. One woman in the Candlelight opening night audience mentioned that when she was a teenager, the weekly slumber parties usually included their favorite movie – “Newsies.” She claims to have seen it 14 times. The movie was a critical and financial failure, but subsequently developed a surprisingly large fanbase. Bale noted, “You say something bad about “Newsies” and you have an awful lot of people to answer to.”

When the movie became a Broadway show, it became a hit and ran for more than 1,000 performances, gaining a whole new generation of fans. The production was highly honored, especially for the choreography, and has transferred to the Candlelight stage with great enthusiasm.

Some of the older patrons, such as me, who grew with Broadway’s “Sound of Music,” “South Pacific,” and “The King and I” initially had a difficult time. Diction was not perfect early in the show. But once the story line began to make sense, the audience was more appreciative. By the time Act II concluded, everyone appeared to be “aboard,” and curtain call acclaim was exciting.

Story is loosely based on an actual strike event in New York City in1899. Newspapers were sold by young men and women, “Newsies,” who had to buy the papers each day, making money only on the papers they sold, as none were returnable. Joseph Pulitzer, publisher of the New York World, realized the paper would make more money if he increased fees the Newsies needed to pay. Kent Sugg is very good as the heartless Pulitzer. Pulitzer went on to great fame and glory with creation of the “Pulitzer Prizes” in later years. In 1899, however, such generosity was not on the horizon. Even New York Governor Teddy Roosevelt, well portrayed by David L Wygant, was not happy with Pulitzer at the time.

The plight of the Newsies was made even darker, as the police would pick up young boys for a variety of supposed crimes and have them incarcerated in “The Refuge.” This was a horrific situation, as the boys suffered while the police made government money for each boy they placed.

“Newsies” Jack Kelly is the ring leader of the unhappy young newspaper hawkers, encouraging then to go on strike to reverse the fee increase. Logan Traver sings well as the unhappy Jack, desperately wanting to escape the plight of New York City, and wishing to re-locate to the site of his dreams, Santa Fe. Traver has a very good singing voice and is an exceptional dancer. Harmony Livingston plays Katherine Plumber, a journalist who is interested in the Newsies plight. It turns out that she has more to offer than Jack Kelly ever imagined. 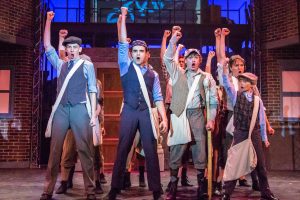 While the cast is universally talented, several performances stand out, including newcomer Hugh Butterfield as Romeo making his Candlelight debut, Ben Welch as the unfortunately handicapped “Crutchie” who is taken to the dreadful Refuge, and Cole Emarine who serves as dance captain. There are 28 performers in the large cast. The role of the young Les is played by Tyler Fruhwirth and Hayden McDonald in alternating performances. Tyler performed the role opening night and was delightful as the spunky young boy.

Choreography continues to be “Newsies” primary claim to fame. Early in Act 2, the audience broke into applause during the “King of New York” routine. Choreographer Matthew D. Peters put dancers through a “boot camp for dancers” early in the rehearsal schedule, making certain the already-talented performers could maintain their stamina through an exhaustive production. They have learned well, and stamina they have! Pat Payne’s direction of the entire production is excellent.

“Newsies” is a joy for fans of the movie, as well as for the older audiences, delighted to learn what all the fuss is about from the younger generations.