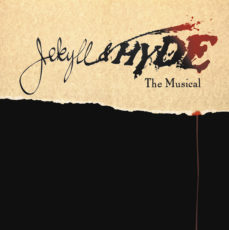 There’s substantially more than the soft glow of “candlelight” in Johnstown this season, as the “Jekyll and Hyde” musical is sheer brilliance. The Candlelight Dinner Playhouse has raised the bar so high with this triumphant production that it may be nearly impossible to beat!

Two women are in love with the same man, a man that has two very different personalities. One is a passionate and romantic doctor. The other is a terrifying madman. Sound familiar? Substantial modifications have been made to Robert Louis Stevenson’s classic story, published in 1886. The “Jekyll and Hyde musical, based on Stevenson’s novella, made its way to the Broadway stage in 1997 after receiving great reviews on its way to New York. The sinister tale with glorious music has subsequently been acclaimed by audiences worldwide

A professional scientist, Dr. Henry Jekyll is horrified with the illness that his father has suffered, and is determined to find some sort of cure. He is infatuated with the idea that good and evil are fighting each other in the physical body of everyone. If he can find a way to separate the two, he will bring great relief to all mankind. Local London leaders, while professing to be somewhat interested in his claims, refuse him the opportunity of trying his experiments on anyone currently living.

Left with no other choice, he begins experiments on himself; resulting in the personality of Dr. Jekyll turning into two very different persons – the kindly doctor Jekyll and the madman murderer known as Edward Hyde.

This season in Johnstown Scott Hurst and John Sosna take turns in the Jekyll/Hyde role, alternating performances though the end of March. When I asked which lead I should see to review the show, I learned that “each is incredible, and each brings unusual wonder to the role.” So, I saw both of them in two days – Scott Hurst on opening night and John Sosna the next night. Yes, they each bring a different “take” on the role. And each is kind and loving one minute — mean and horrifying the next.  When asked to “compare” the two portrayals, it became clear that their performances are truly incomparable. Each is astonishing.

Astonishing, along with virtually everything else in this show. Putting up with the man with two personalities are Lucy, portrayed by Susanna Ballenski Houdesheldt, and Emma Carew, played by Katie Jackson. Emma is in love with the kindly but outspoken Dr. Jekyll, and is engaged to marry him. Lucy comes from the entirely opposite spectrum of London society, a prostitute working in a pub.
Houdesheldt and Jackson give equally accomplished performances. Lucy has the saucier role, with probably the best-known songs. Along with chorines from the Red Rat Pub, she brings the house down with a raucous and incredibly choreographed “Bring on the Men.” This is one of the most memorable musical numbers on a local stage in recent memory.

She then pulls out all the stops with “Someone Like You” and “A New Life.” Katie Jackson as Emma Carew is convincing with “Take Me As I Am” sung with Jekyll, and the solo “Once Upon a Dream.” Jekyll’s “This is the Moment” is probably the best-known song from the show. Then, as he goes into craziness he haunts the stage with his “Streak of Madness” and with “Confrontation” as he pits his two personalities against each other. The two women in love with him share a haunting duet, “In His Eyes.”

While the crazed doctor plunges into madness and the two adoring women try to figure out what is happening to the man they love, the plot becomes more and more sinister.

Robert Michael Sanders’ direction is flawless. Everything works like clockwork. Jessica Hindsley’s choreography is brilliant. The set, costumes, and lighting are breathtaking. Sound is very good. Orchestra under direction of Phil Forman is first-rate.

What’s not to like about this show. Well, a couple of things. Comprehension of some of the dialogue and chorus lyrics can be problematic. I wished that the lyrics could be flashed above the stage, so that I’d better understand what was being said or sung. I have become so accustomed to rousing finales to musicals that I was not prepared for the show’s more serious ending. But – what a way to end the show!

Many years ago my wife and I saw the show with the original cast in New Haven, CT, prior to its opening on Broadway. We were impressed, but not as dazzled as we were this week by the Candlelight show. This production reeks of quality, and yes, “brilliance.”

Opening night I was sitting fairly close to the stage and could see every emotion of the performers. The second night I was towards the rear of the auditorium. I did miss the up-close-and- personal look at the actors, but was more dazzled with the overall look of the show, seeing it from a distance.

Whether sitting up close or far away, seeing either John Sosna or Scott Hurst as the lead, audiences just can’t go wrong with this. Be aware, this is not “Mary Poppins” or “Seussical the Musical.” This is a sinister and sometimes horrific two hours of incredible musical entertainment. Leave the children at home; sit back and be amazed.