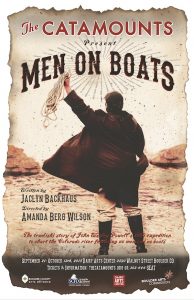 Alright, already – the men aren’t men. The cast is entirely female, dressed as male frontier explorers, excellently guiding the audience through the saga of John Wesley Powell’s first trip down the Colorado River in1869. What a trip!

The Civil War had concluded five years earlier. The transcontinental railroad had just begun operation, sufficient to transport boats for the Powell expedition to enter the river at what is now Green River, Wyoming. The entire expedition down the Green, connecting to the Colorado, and concluding at the western edge of the Grand Canyon was fraught with peril. The telling of the story is fraught with peril of its own as the amazing cast is jostled through rapids, over waterfalls, with sometimes brief stretches of calm on the three-month journey.

Staging is remarkable. There is no water in sight, but the production has been incredibly choreographed and directed to have the audience feel we are actually with the group on the river, and on the dry land for campfire meals, and local explorations. When boats are capsized, the audience wants to reach out to “grab” the expedition members to save them from drowning. Fortunately no one drowned on the expedition, although four of the original ten members did leave the group before journey’s end as the river emerges from the cliffs of the “Grand” canyon.

This is theatre at its most remarkable success. Director Amanda Berg Wilson has done an excellent job in putting the actors through their paces, to bring a feeling of raw courage and realism in the production. The women become the “men” they portray, as gender becomes unimportant.

GerRee Hinshaw portrays the one-armed Major John Wesley Powell. He lost his arm in a Civil War battle, but that has not reduced his ability to explore rivers. By the time the expedition begins, he is already one of the most river-travelled men in America. He is portrayed in “Men on Boats” as a stern leader, with great knowledge of river travel, less knowledge of how to deal with men under his command. Near-mutinies result. He has been hired by the U. S. Government to head the expedition, and intends to succeed – despite frequent criticisms by the men in his charge.

The group is a motley crew. There William Dunn, convincingly played by Karen Slack. Dunn is a hunter and trapper, excited when Powell decides to name a mountain peak after him. Joan Bruemmer-Holden portrays John Colon Sumner, a former soldier in the Civil war, and now a western explorer. Edith Weiss becomes Old Shady, another Civil War vet and older brother of the expedition’s leader. Erika Haase is Bradley, a youthful part of the team sometimes with more courage than sense. Ilasiea Gray is O. G. Howland, a printer and hunter, with Joelle A. Montoya playing Howland’s younger brother Seneca. Jessica Austgen is the British Frank Goodman, initially so very excited to be part of the group, but with a desperate longing to be back somewhere in Europe, preferably on the beaches near Marseilles. McPherson Horle is Hall, the mapmaker; and Missy Moore is Hawkins, the cook whose role becomes increasingly challenging as rations run dangerously low.

The show’s program notes that “The Catamounts create audacious contemporary theatre … believing in the necessity of new work, the power of collaborative creation, the constant innovation of artistic forms.” They succeed in all endeavors with this uniquely creative production. Author is Jaclyn Backhaus. The show’s thrilling endeavors are the action on the stage, as the river tests the courage of the expedition. The script does beg for more information about what is not told. I did race home to “Google” more about the expedition and the characters portrayed.

Last week my wife and I went through a few areas mentioned on the expedition story. We stopped briefly in Green River, Wyoming, where the group began the journey on the Green River. Just outside Moab, Utah, we found a plaque about the Expedition on one of the overlooks of Canyonlands National Park. We then stopped in Green River, Utah, to visit the John Wesley Powell Museum.

Today’s views of the canyon from above are remarkable. There is “civilization” with motels and stores, only to look down the canyon to see still-forbidding landscape of the Green and Colorado rivers that merge just outside Moab. The incredible story of traversing the rivers, thanks to Powell and his “Men on Boats,” has become fascinating history.

The Catamounts theatre company is making fascinating history on its own with this exhilarating production.