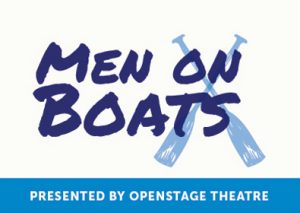 Men on Boats?  Nope.  The OpenStage theatre program for this show wisely notes that the show’s title is not right.  There is neither a man nor a boat in sight.  The “Men on Boats” take the audience on a fascinating journey down the Green and Colorado rivers to the western edge of that “Big” Canyon – the “Grand.”

Genders are switched in this unusual entertainment at OpenStage this season.  Explorer John Wesley Powell led a team of men down the rivers in an 1869 expedition that would forever be regarded as quite an accomplishment.  Powell had lost an arm in the Civil War, but that did not deter him from fighting the rapids and waterfalls of the Colorado to the western edge of the Grand Canyon.  His men were a motley crew who signed up for the journey for a variety of reasons – some simply because they had nothing else to do when the war ended. Powell was already a famous river explorer and was determined to successfully conclude the assignment the U.S. Government had given him – that of exploring the rivers from Wyoming, Utah, and Arizona through “big” canyon – now known as “Grand.” 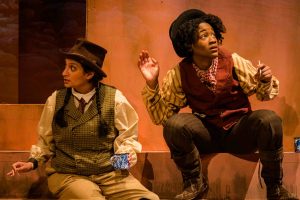 The Civil War had concluded five years earlier.  The transcontinental railroad had just begun operation, sufficient to transport boats for the Powell expedition to enter the river at what is now Green River, Wyoming.  The entire expedition down the Green, connecting to the Colorado, and concluding at the western edge of the Grand Canyon was fraught with peril.  The telling of the story is fraught with peril of its own as the amazingly physical cast is jostled through rapids, over waterfalls, with sometimes brief stretches of calm on the three-month journey. 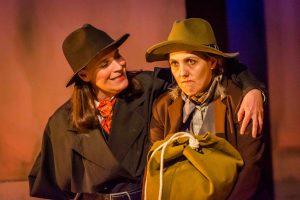 OpenStage co-founder, Denise Burson Freestone, has directed this tale utilizing the talents of 10 persons (mostly in boots).  The staging is interesting; some scenes of the rivers and canyon are projected onto the stage, keeping the flow of the story in motion.  There is no real water in sight, scenery is minimal.  The production has been cleverly choreographed and directed to feel we are actually with the group on the river, or on the river’s bank for campfire meals and exploration. 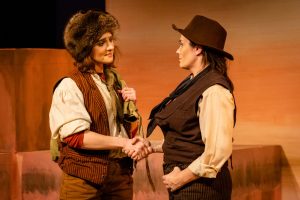 The unseen river throws the characters around the stage as if they are rag dolls, tossing them from one end of the stage to the other as they are jostled from the imaginary boats into the imaginary river and pulled by imaginary ropes to safety. No one in the actual expedition drowned, during the journey although four of the original ten did leave the group before the journey’s end, opting to try their luck in finding safety above the river.

Kate Austin-Groen portrays the tough John Wesley Powell, with Shannon Nicole Light as William Dunn, a hunter and trapper wanting to leave his legacy by lending his name to landmarks of his choice.  It was difficult to understand some of the dialogue.  The author, playwright Jaclyn Backhaus does not give the audience enough time to carefully assimilate the identity of each character.

There are ten men in the expedition, plus three other characters who turn up near the end of the journey.

In addition to Kate  Austin-Groen and Shannon Nicole Light, the cast includes Molly McGuire as a professional guide and outfitter, Maya Jairam as a printer, editor and hunter (and as an Indian Chief), Kaya Rudolph as a mountain man (and as the Indian Chief’s wife), Aleah Black as an Englishman (and as a desert settler), Rebakah Goldberg as younger man, Briana Specher-Kinneer as Powell’s older brother, Heather Ostberg Johnson as the cook, and Alex Forbes as a mapmaker

This is a most unusual entertainment, requiring the audience to use imagination to the fullest to bring the story to life.  The result is well worth the effort, as the “Men on Boats” breathe life into this trueish tale of adventure and discovery.